Skip to menu
Skip to content
Home|About hydrocephalus|What is a shunt?

What is a shunt?

What is a shunt? 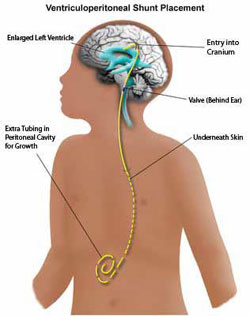 A shunt is simply a device that diverts CSF around the obstructed pathways. This stops it accumulating and returns it to the bloodstream. It consists of a system of tubes with a valve to control the rate of drainage and prevent back-flow. It is inserted surgically so that the upper end is in a ventricle of the brain and the lower end leads into the abdomen (ventriculoperitoneal or VP shunt).

The device is completely enclosed so that all of it is inside the body. The fluid which is drained into the abdomen passes from there into the bloodstream. Other drainage sites such as the outer lining of the lungs or the heart can also be used, although this is rarely done now.

In most cases the shunts are intended to stay in place for life, although alterations or changing the shunt (called revisions) might become necessary from time to time.

Are there any complications with this kind of treatment?

Complications are usually caused either by blockage of the system, or by infection. They are only occasionally due to mechanical failure of the valve.

The tube (or catheter) may become too short as the individual grows and an operation to lengthen it might be necessary. However, more recently, most VP shunts for babies and young children are fitted with an extra coil of tubing to allow for growth.

Symptoms usually develop gradually. In some cases a blockage might be seen through a gradual deterioration in overall performance. Occasionally, symptoms are quite sudden and severe and may include headaches and vomiting. Various tests can be carried out to confirm the diagnosis. Medical advice should be sought if a shunt blockage is suspected.

If symptoms worsen rapidly, specialist attention (preferably at your neurosurgical unit) should be sought.

Shunt infections usually occur soon after the operation to insert the shunt. Symptoms vary depending on the route of drainage. In ventriculo-peritoneal shunts the symptoms will often resemble those of blockage. This is because when the shunt becomes infected, the lower catheter is very often sealed off by swollen tissue. There may be accompanying fever and abdominal pain or discomfort.

Various tests can be carried out for shunt infections and medical advice should always be sought if an infection is suspected.

Symptoms of over-drainage are similar to those of blockage. A severe headache, which is reduced when lying down, is a common symptom.

What symptoms should be looked for?

Whenever there is a possibility that hydrocephalus is causing problems, it is important to seek the correct help immediately.

Possible signs of ACUTE shunt blockage or infection may include:

Possible signs of CHRONIC shunt blockage may include:

How are shunt problems treated?

Shunt blockages that are causing illness usually require an operation to replace or adjust the affected part of the shunt. Shunt infections are usually treated by removal of the whole shunt and a course of antibiotics before insertion of a new system. Modern approaches to antibiotic therapy mean that such treatment in most cases can be expected to succeed.

Repeated shunt revisions (alterations or replacements) can be associated with increased difficulties in thinking and acting. When a shunt isn’t working properly there will be a change in the pressure around the brain that can cause additional damage to the brain’s tissues. Increased damage may result in increased thinking (cognitive) and behavioural difficulties. See Hydrocephalus and the brain for more information about the possible effects.

A ‘shunt alert card’ emphasises that, if the cardholder is showing signs similar to those which occur when there is shunt blockage or infection (see above), urgent assessment of shunt function should be carried out in a specialist neurosurgical unit, in order to eliminate shunt failure as a cause.

SBH Scotland has Shunt Alert Cards. These should be carried at all times by people with hydrocephalus treated by a shunt (this will include some people with spina bifida).

The cards are available from SBH Scotland, Helpline & information, Telephone 03455 211 300 or see the Contact us section.

Because of you we provide a lifetime commitment of information and support. Please continue to support us or donate today. Thank you.